The secret is out Deb Hudson is fantastic. Blues, Rock, Soul, and lately a little folk combine the range of this wonderful talent and Key West Treasure.

From Raleigh, North Carolina, Deb grew up sitting on the piano bench next to her dad who was a Jazz pianist. Deb’s father hailed from Montgomery, Alabama, and his family had ties to Hank Williams, Sr. She credits her Dad with her style of singing down to the inflections in her voice. Although she has been around music all her life and has been playing guitar and writing songs since she was 12, Deb believes Nashville, Tennessee, gave her music its direction.

Moving to the Music City from North Carolina in the 1980's, Deb followed her singer/songwriter dream, jamming with John Prine, Dave Loggins, Don Everly, Tanya Tucker, Wynonna Judd, Mel Tillis, Guy Clark, Nancy Griffiths, and many others. She toured with Grand Old Opry star Del Reeves and played with him on the Opry stage, opened for Don Schlitz ("The Gambler") at the famed Blue Bird Cafe, and wrote songs with Dave Loggins, performing with him in New Orleans.

Deb came to Key West in 1989 on a hiatus and fell in love with the place. After a relationship breakup and an MGM music contract ending she told her friend Don Everley that she wanted to go somewhere to get "away" from the music business and relax for a while. He suggested Key West. Through a friend, Harlan Howard, (I fall to Pieces), Deb hooked up with Shel Silverstein and they wrote three songs together, including the classic, "I’ll Never Forget What’s His Name". By coming to Key West Deb did not get "away" from the music business---thank goodness. Key West is the only place where she can live and not be uptight and stressed out The Key West atmosphere, the laid back life style, adds up to great music from Deb.

One night in 1989 at the Full Moon Saloon, Bill Blue and his band "The Nervous Guys" were playing, and Deb was asked to sit in. She's been singing with Bill Blue ever since. She also recorded backup for Scott Kirby in Jimmy Buffet's Shrimpboat Sound Studio and has performed with many other local and visiting musical greats.

Check out my new book - THE SOUL OF KEY WEST
This is the first book about the Key West Music scene. The story is told by Deb Hudson and 45 other musicians along with over 200 color photographs available at: 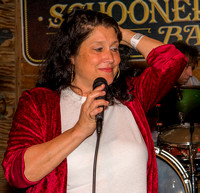 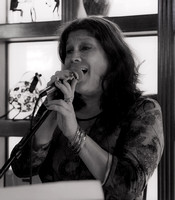 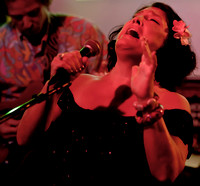