Less than a quarter mile offshore of the famous Malecon is 1000 feet of deep blue water where giant Blue Marlin patrol. You can still hear the cars driving along the seawall and sea local fisherman and divers along the rocks.

A mile or so offshore and you are fishing in 3000-4000 feet of Gulfstream water that Ernest Hemingway and his famous boat the Pillar would hunt for Blue Marlin. His former Captain Gregorio Fuentes is reputed to have been his inspiration for the fisherman Santiago in his Nobel Prize winning novel "The Old Man and the Sea."

Just a few minutes in this environment and one is overwhelmed by the natural beauty of the Havana coastline and intrigued about fishing the same waters off Hemingway's home port of Cojimar. The Blue Marlin are still the legendary fighting sport fish in this part of the world.

So naturally we had to give it a shot. The Marlin teased us with 3 strikes but we struck out. Nevertheless it was a great day of fishing. We caught several tuna and enjoyed the best ceveche bonita ever for lunch. 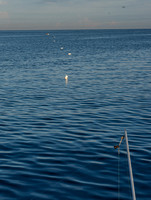