Robert is a homegrown Key West talent who grew up on the corner of Amelia and Whitehead streets enjoying his older brother George’s singing. George went on tour with BB King for a short time before returning to Key West. Another brother, William was a great singer but never went professional.

Robert Albury grew up just behind a nightclub that is now the home of the Elks Club. He remembers big name acts performing there in the 1950's, including the legendary Louis Armstrong, Lionel Hampton, and Lou Brown. Robert would climb out on the roof of his family’s house to listen to the performers on the open air stage in the rear of the nightclub. The young Robert Albury was most inspired by Louis Armstrong's performance.


Check out my new book - THE SOUL OF KEY WEST
This is the first book about the Key West Music scene. The story is told by Robert Albury and 45 other musicians along with over 200 color photographs available at: 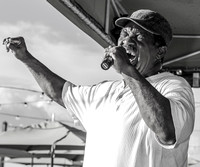 Robert Albury at the Green Parrot 2021 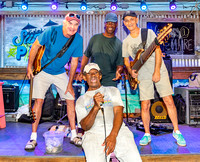