The Soul of Key West, Volume 1 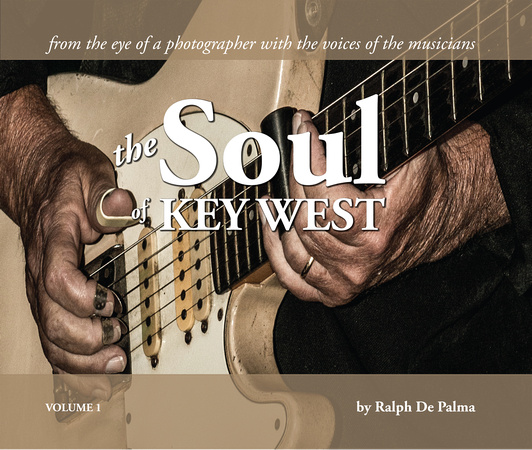 the Soul of Key West

Writer and photographer Ralph De Palma has an unabashed passion for capturing images of music and the people who make it. “Photographing musicians and performances to me is like photographing lightning on a dark summer night,” says DePalma. “I have to be patient and prepared but more importantly I have to know what I’m looking for and how to look for it.”

De Palma has just released "The Soul of Key West", a 104 page anthology of the Key West music scene, as told by the musicians. Their stories are the true description of the lives of the professional musicians who call Key West home. The book includes 46 interviews, and over 200 hundred photographs culled from a collection of 2500.

De Palma has been an avid photographer for years and bought his first camera while in the Army. “My camera and I have driven my wife and children crazy for years,” laughs De Palma, who is a software developer by trade. “I learned about digital imagery and photoshop in 1998. Digital has changed everything, especially low light photography in dimly lit bars and cabarets.”

De Palma has lived in Key West since 2001 and over the years became enamored with the unique musicians that play the local bars and venues. De Palma’s passion for Key West’s vibrant music scene led him to spend countless hours photographing and interviewing dozens of musicians. His vivid photographs capture the rocking spirit of a tiny island filled with over fifty venues featuring live music, and his words roll out the stories, struggles, and triumphs of musicians who play in Key West night after night.

“The book started out as a typical coffee table book project,” admits De Palma, who credits his wife for encouraging him to compile the book. “Then I started interviewing some of the people that I wanted to present with a small caption. The stories became so compelling that the tenor of the book changed dramatically-for the better. It's still a photo book but the stories of these great musicians take the tone of the book to another level.”

“A really defining moment for me in the creation of the book came a few years ago when my wife and I were attending the second annual Key West Musicians Festival at The Smokin' Tuna,” says De Palma. “While enjoying the great bands performing on stage, I looked over at the bar and there were a group of musicians supporting their fellow players on stage. The stage was filled for the two day festival, but many musicians still did not get to perform. I knew then there was something very special about this tiny island with a huge music scene; it also has a huge music heart.”

De Palma is not a musician but seems to have a unique understanding and eye when it comes to photographing the moments that matter during a performance. “Capturing images of performances is challenging but oh so compelling. The moment when a performer gets into that special place where he or she quits thinking about the song or the audience and can take the music almost anywhere? That's magic. That's the moment my shutter goes click and I know I've grabbed a moment of true musical art.”