Rolando's original home is in vineyard and wine making region of Vinadelmar in Chile. He moved to Key West in 1993 to be close to his former wife's family that had lived here for years.

His first gig in 1993 was with the original Conjunto Caribe band with Jose Rodriquez. Caribe was originally formed in 1989. At that time it was a twelve piece band with mostly Navy guys playing. In 1993 the original band was downsized a bit and changed names to Caribe of Key West. The Combination of Conjunto Caribe and Caribe of Key West have been playing together for over 24 years probably the longest run of any Key West band.

Today Caribe is a number of musicians that move around and play all over, Kenny Fradley, Jose Rodriquez, Dave Parker, Roy Chavez, Louis Vera. Most of their gigs are a three piece band.

In the beginning Rolando learned to play the guitar first then while in music school he stopped playing and learned the piano. He did not touch a guitar for 15 years. Then in 2004 he fell in love again with the guitar and now plays all kinds of guitars.

A Night of Latin Jazz 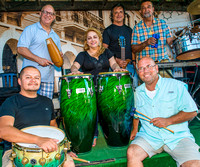 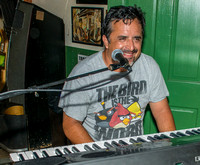