The Fairchild Botanic Garden located on Old Cutler Road in South Miami is one of the most beautiful places in all of Florida.


Fairchild Tropical Botanic Garden gets its name from one of the most famous plant explorers in history, David Fairchild (1869-1954). Fairchild was known for traveling the world in search of useful plants, but he was also an educator and a renowned scientist. At the age of 22, he created the Section of Foreign Seed and Plant Introduction of the United States Department of Agriculture, and for the next 37 years, he traveled the world in search of plants of potential use to the American people. Fairchild visited every continent in the world (except Antarctica) and brought back hundreds of important plants, including mangos, alfalfa, nectarines, dates, cotton, bamboos and the flowering cherry trees that grace Washington D.C.


Dr. Fairchild retired to Miami in 1935 and joined a group of passionate plant collectors and growers, including retired accountant Col. Robert H. Montgomery, environmentalist Marjory Stoneman Douglas, County Commissioner Charles Crandon and landscape architect William Lyman Phillips. This core group worked tirelessly to bring the idea of a one of a kind botanic garden to life, and in 1938, Fairchild Tropical Botanic Garden opened its 83 acres to the public for the first time.
© Ralph De Palma Photographer 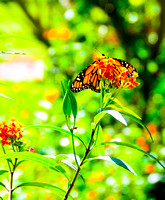