Ken was born in Greenwich Village, New York, and grew up in Barrington, Rhode Island. Ken started college as a science major and was very interested in astronomy. He attended Brown University and led the Brown University Jazz Club. Choosing music over science, he decided he wanted to go back to New York and enrolled in the Manhattan School of Music. He also studied the trumpet at the Juilliard School of Music.

Ken feels it was a natural progression from science to music. Music is so mathematical,. It's a moving grid of time and musical notes. According to educational research, when music is taught to children it "aligns" their brains and can enhance children's future careers in engineering and science. Ken's believes cutting music programs in public schools is almost criminal.

Ken began playing the piano when he was ten years old. Later, in the school system, he took up the bass clarinet because that's all that was available. He did well for two years until his parents sent him to music camp and he was introduced to the trumpet. He played a high C the first time he picked up a trumpet and was immediately hooked.

Ken has always been very interested in popular music with a lot of rhythm, such as rock, soul, rhythm and blues, and salsa. He likes dance music, especially Latin music, and played with the famous Celia Cruz and Tito Fuentes. Ken toured Europe for twenty years with Kid Creole and the Coconuts and played on U2’s War album, which was released in 1983. Ken appeared in several Hollywood films as a member of Kid Creole’s band, including Against All Odds and Zoe. Kid Creole and the Coconuts performed eight songs in Zoe, and Ken did all of the horn arrangements.

Ken has been coming to Key West, playing with Larry Baeder and other musicians, since the early 1990's. He was playing in Key West on 9/11, and when he returned to New York there was little or no work available. So Ken came back to Key West and has been here ever since.

Ken likes the many colorful characters of Key West. He feels at home around people and loves getting to know his fellow musicians. He also likes the people who run Sloppy Joe’s, The Hog’s Breath, BO's Fishwagon, The Smoking Tuna, and El Meson de Pepe, the clubs where he works most of the time. El Meson de Pepe always pays musicians well, even on days when it rains and there are no customers. Ken credits Charlie Bauer for bringing a lot of Nashville talent and the Songwriters Festival to Key West.

The work for musicians in Key West is steady. Ken averages nine gigs a week. relatively stress free music in Key West "we never had a recession here". Key West tourism has flourished and the smart club owners understand the role of music in their venues.

As a trumpet player, Ken usually plays with a band and has met a number of very talented musicians. In Ken's opinion the level of Key West music has increased in quality and creativeness in the years that he's been in town. The Key West music scene may be the only place tourists can walk from place to place and enjoy great live music, unlike the New Orleans or Memphis "music destinations,” which have cover charges.

Its about all of our favorite Key West musicians.
© Ralph De Palma Photographer 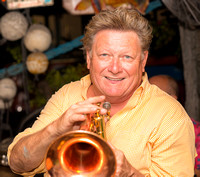 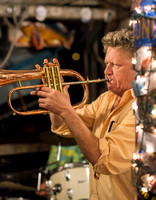 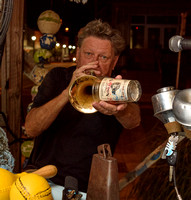