Originally from Richmond Virginia, Ericson Holt lived all around Central Virginia. His mother was a writer. She wrote several songs to protest a prison project in the historical Green Springs area. When his mother bought a piano, Ericson started playing. He began his career as a blues and boogie piano player at East Coast blues bars and Nags Head NC beach bars. Ericson played in blues bands up and down the East Coast and moved to Nashville in 1994. He learned the country music business and began writing a lot of music. He credits advice from his friend and mentor, guitar great Michael McAdam, and a chance conversation with Bruce Hornsby at a Richmond radio station for the impetus for the move to Music City. Hornsby told him that if he wanted to be his best, he’d have to “leave my home court and go where the big guys play.” Ericson worked on recordings, international tours, and television shows with Grammy winners the Mavericks: Allison Moorer; Rodney Crowell; Jim Lauderdale: and Lee Roy Parnell, to name a few. Charlie Bauer first brought Ericson to Key West. Bauer was managing the Hog’s Breath Saloon and brought performers down from Nashville regularly. “There is a well worn path between Nashville and Key West.“ The Hog’s Breath was a great gig at the time for a Nashville songwriter. According to Ericson, "Anytime you're going towards the equator it's the right thing.” Ericson spent a good deal of time on that well worn path and finally moved to Key West in 2010.


Check the Key West music scene and my new book "The Soul of Key West" released November 22, 2013. Its the story of our contemporary Key West Music. 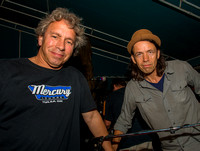