I started working at the John F. Kennedy Space Center in 1985. The Space Shuttle program was burgeoning. It took some 18, 000 engineers, technicians, and managers to get every Space Shuttle launched.

NASA was trying to ramp up to 50 flights a year - as promised. Everyone was on a standard 60 hour work week. You had to beg for a day off. In 1985 we launched 10 Space Shuttles and processed 11. NASA would never launch any more Shuttles than that in a year.

Fast forward to 2011. Its 30 years after the first launch of Columbia. The spacecraft are aging, the entire program is suffering from the routineness (not sure thats a real word) of launching these incredible vehicles into low earth orbit and spinning around the globe once every 90 minutes.

I know its time to move on. but its sad to see it end. Covering this last roll-out and launch was a bitter sweet event for me.

I get off "the Rock" from time to time and try to soak up as much of our beautiful world as I can. The goal of my work is try to capture digitally the experience along with the vision.
© Ralph De Palma Photographer

The Last Roll Out 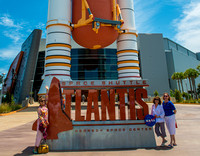