The oldest and largest recording studio in Cuba is Empresa de Grabaciones y Ediciones Musicales (Enterprise of Recording and Music Editions), aka EGREM. Originally named Estudios Arieto, it was founded in 1943 by musician/engineer Ramón Sabat at the site of a former tobacco processing plant in the center of Havana. Arieto means fiesta in the native Taíno Indian language. When entering the cavernous studio with its thirty foot tall ceilings, one gets a feeling of being in a very special place. The wood paneling adds to the warm ambience and also act as a sound diffuser and absorber, creating a very distinctive acoustic environment. This studio is hallowed ground of Cuban music where epics have been recorded: 1940s big bands, legendary stars like Nat King Cole, Sarah Vaughn, Benny Moré, the famous Buena Vista Social Club, and contemporary artists like Chucho Valdes, Omara Portuondo, and Juan Formell. A palpable music spirit fills the studio. This innate characteristic makes this older facility, and its somewhat dated equipment, more popular than some newer recording environments.

A second EGREM Studio, Arieto Estudios 18, was founded in 1998 by singer Silvio Rodriguez, a renowned Cuban singer/composer who has released over twenty albums. Located outside Havana in the Miramar suburb, it is a modern facility with updated equipment and stays quite busy. A third EGREM studio, Siboney, named after another native Indian tribe, is located at the easternmost end of the island in Santiago de Cuba.
© Ralph De Palma Photographer 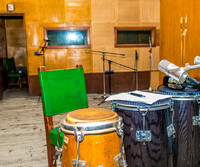 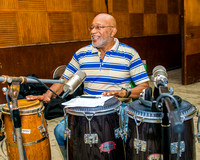