Barry Cuda (aka: St. Petey Twig) has been a Key West fixture for the past 30 years. While touring Northern Europe in 1984 with Bill Blue, Cuda was influenced to give Key West a try. His band was breaking up and he was offered some piano work and a respite in Bill Blue's home during an intended two month stop on the way to New Orleans. The fifth generation Floridian has been playing Key West ever since.

Barry had been touring with a Tampa based band for over 8 years and decided Key West was a place where "I could be in one place and the audience could tour.”

Born and raised in Pensacola, where his father was a hip eye surgeon who could have easily been an R&B musician. He listened to his dad's 78's and LP's while growing up and loved the cool jazz and Big Band swing. While an art major in college, he was drawn toward an older style of music than pop, which seemed formulated mostly for profit.

Cuda's favorite gig is playing at BO's Fish Wagon. It’s small and funky and the crowds are different than in other venues. He really enjoys playing with Kenny Fradley and Richard Crooks in a band they dubbed "Bong Hits For Geezers".

Check out - THE SOUL OF KEY WEST, Volume I
This is the first book about the Key West Music scene. The story is told by Barry Cuda and 45 other musicians along with over 200 color photographs available at:

Key West Music Scene
The Soul of Key West Vol. I & Vol. II are available in most gift shops, The Island Book Store, and online at:

Cuda At the Little Room 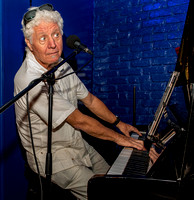 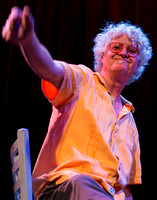 Barry Cuda at the Green Parrot